Warning
Our new website is optimized for the most current web browsing technology. If you are using an older web browser, part of our website may not function properly as designed. Please consider upgrading your browser for an error free experience.

~ Give the gift they'll never forget ~

Keith grew up in Colfax, Louisiana in a plantation home surrounded by fruitful pecan trees which he harvested every year for his grandmother.

As the years passed, Keith's passion to become an entrepreneur in the produce business blossomed through selling Hammond Strawberries; however, once the Strawberry season was complete he found there was a need for a Fall product. It was not until the produce business became highly competitive that Keith realized he had to step up and find something that stood out from all others.

In 2010, Keith stumbled onto a secret family recipe involving pecans, it was then Keith began his journey to the discovery of "Holiday Fried Pecans". After several unsuccessful batches, he finally perfected the first "original" and dangerously delicious treat which is now known as Holiday Fried Pecans.

Keith Baum developed a dream, set it in motion and it is now a flourishing company. Keith's and Holiday Fried Pecans motto is and always will be to strive for the pinnacle of pecan perfection. After all every day should be a Holiday.

The company's rise in popularity can be attributed to its first treat a salty, sweet 100% certified Louisiana fried pecan that is guaranteed to satisfy the most demanding of cravings. 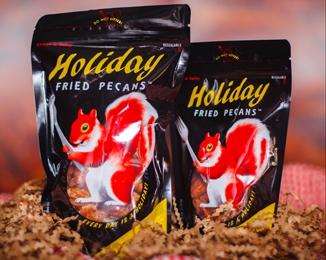 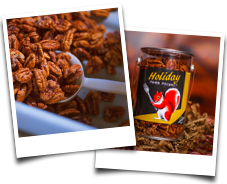 Stand out from the rest